Cancer of the female genital tract is the third most common group of malignancies in women, exceeded in frequency only by cancer of the breast and of the digestive tract.

Ovarian cancer is diagnosed in 400 new cases in Norway each year, and results in 270 deaths annually, with 59 being the average age at diagnosis. Uterine cancer, with 700 new cases yearly, encompasses several subtypes, where endometrial cancer is the most frequent and the fourth most common cancer type in women.

Most of the cancers are of the ovaries and uterus, and these are the ones we are focusing on. 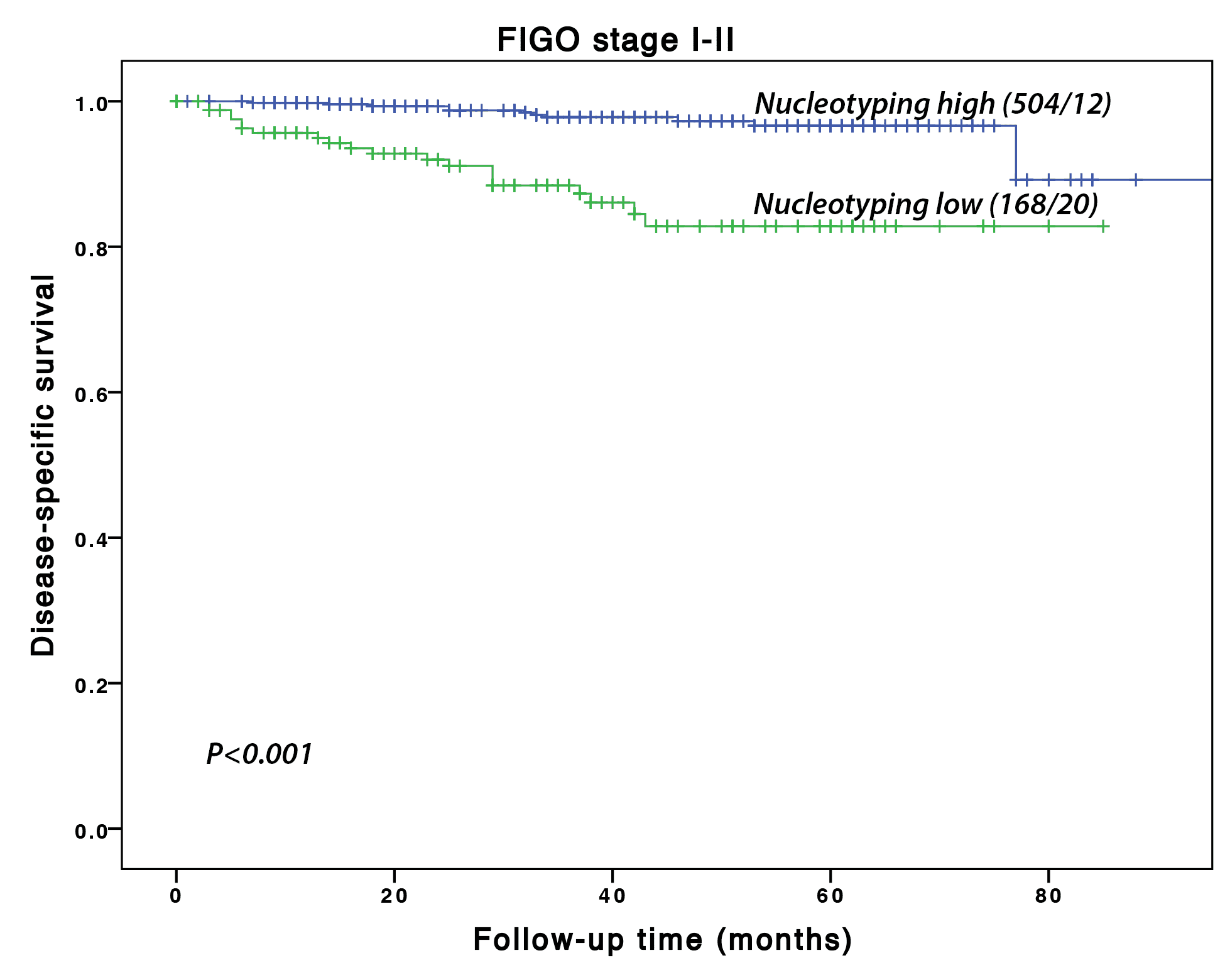 Nucleotyping as a prognostic marker in stadium I-III Endometrial cancer

We have analyzed DNA ploidy distribution in about 1.000 samples from patients with endometrial cancer. The project is in collaboration with clinicians from Haukeland University Hospital. The results show that DNA ploidy identifies patients with a high risk of recurrence and metastasis to lymph nodes.

The chromatin organization was analyzed using Nucleotyping, showing that Nucleotyping is an independent prognostic marker for cancer-related death, and stronger than DNA ploidy.

An advantage in this project is that the samples were collected prior to surgery and can be used for adjustment of the treatment plan for each individual patient.

Serous adenocarcinoma is a relatively rare but aggressive endometrial malignancy. In order to establish a prognostic marker, we performed DNA ploidy analyses and assessed the expression of several cancer-related genes through immunohistochemistry: p53, estrogen receptor, progesterone receptor and Ki-67 in 73 patient samples. One of our DNA ploidy parameters stood out as a potential marker: 5c ER correlates to relapse, progression-free survival and total survival ( 5cER counts the number of nuclei with a DNA content higher than 5c, i.e. corresponding to more than 2,5 times the normal chromosome number).

Endometrioid adenocarcinoma of the uterus is a less aggressive cancer type. We have evaluated the prognostic significance of DNA ploidy in 937 patients with stage I and II endometrioid adenocarcinoma. The results show that patients with aneuploid tumors were less likely to have progression-free survival, confirming that DNA ploidy is a prognostic marker for this disease.

Ref: Pradhan M et al., Prognostic importance of DNA ploidy and DNA index in stage I and II endometrioid adenocarcinoma of the endometrium. Annals of Oncology. 2012 May;23(5):1178-84.

Inactivation of the BRCA1 gene leads to chromosome instability. Loss of BRCA1 function due to germline or somatic mutation or epigenetic silencing has been observed in high-grade serous carcinoma in ovaries. In a collaboration with the University of British Columbia, we have compared DNA ploidy and gene expression in 28 cases of BRCA1 lost through mutation, BRCA1 lost epigenetically, and cases without BRCA1 loss. There was no significant difference between the groups. This indicates that high-grade serous carcinomas develop chromosomal instability regardless of BRCA1 status.

Acquired changes in chromosome 19 are often involved in ovarian cancer, and one of our research goals is to characterize these changes. We have performed G-band analysis in karyotype screening, followed by microdissection and FISH analysis of the most relevant markers. We have now started using a higher resolution method using array technologies. The method can detect RNA-level expression. We have examined 26 cases of ovarian cancer showing the marker add(19p) and/or add(19q), which are abnormal chromosomes with pieces from an unknown origin. Each tumor has between one and four such markers, which gave us thirty-seven markers with results in twenty-nine of them.

Upon analysis using microdissection, the markers were isolated and the composition of the chromosomes detected using reverse in-situ hybridization. Following hybridization and amplification, DNA from each marker was placed on an array platform. Twenty-eight of the twenty-nine markers acquired parts of chromosome 19. An amplicon was detected in three markers, showing copies from 19p13. A small area from chromosome 11 was copied to chromosome 19 in 9 markers.

This project is set to expand our knowledge of the mechanisms behind cancer development in ovaries by focusing on the following five points. The goal is to reveal the genes involved in tumorigenesis.

In 200 ovarian cancer samples, we will analyze the following: